Welcome! Each year, I like to take a little time to pause and reflect on the past year’s accomplishments, and to try to peer ahead at what I expect we will be delivering over the coming year. The future is never certain, of course! But I think it’s important to talk about where we are now and where we think we’re headed. 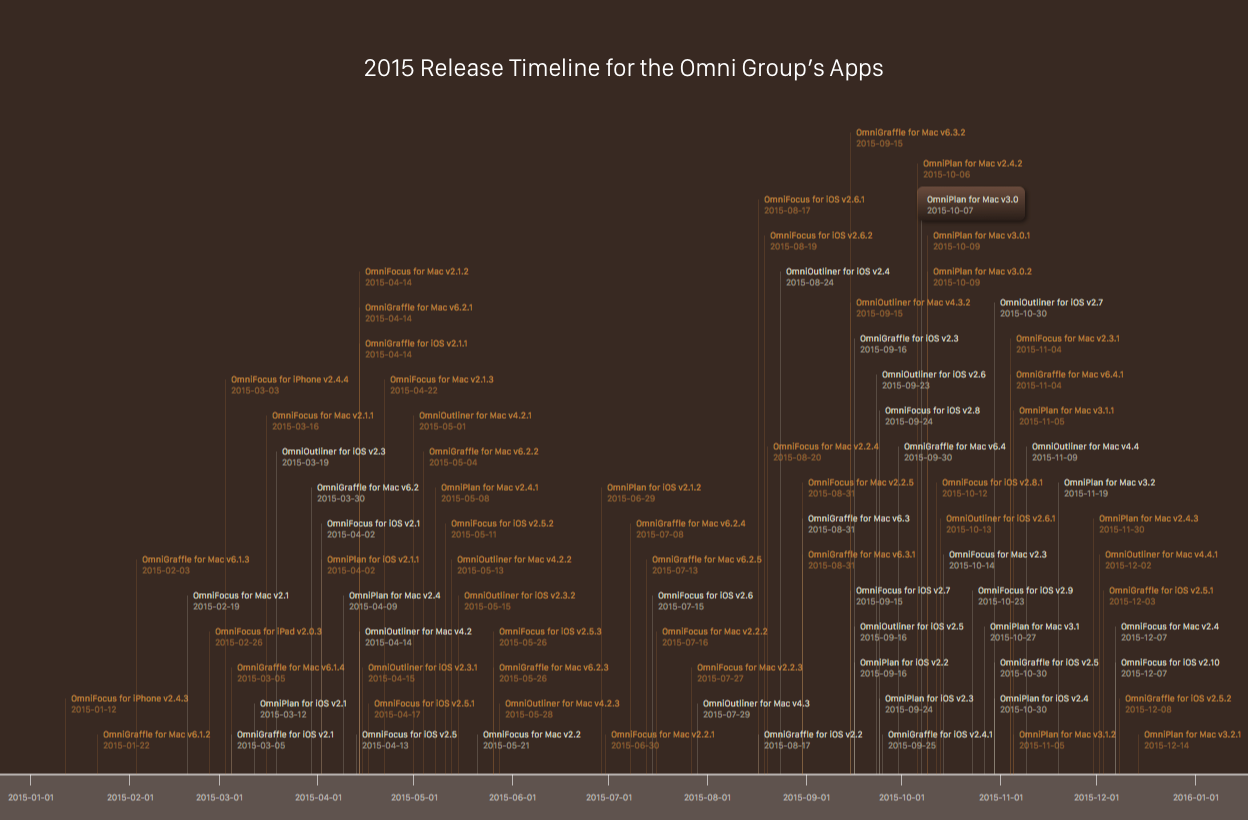 The transition to Universal iOS apps

It’s amazing how much change a year can bring! At this time last year, we had four shipping apps on iPad—OmniFocus, OmniGraffle, OmniOutliner, and OmniPlan—but just one of those apps was available on iPhone. Apple had just shipped the iPhone 6 and 6 Plus, and with their larger screens we decided to bring all our apps to iPhone. And we did just that, shipping free universal updates to the iPad apps that made them also run on iPhone: first OmniGraffle on March 5, then OmniPlan on March 12, OmniOutliner on March 19, and finally OmniFocus on April 2. (OmniFocus was actually ready on April 1, but if we shipped it that day I worried that people might think the whole thing was an April Fools’ joke!)

Bringing each of those iPad apps to iPhone and adapting them to work well and bring all of their functionality to even the iPhone’s smallest screens was a huge effort. But that wasn’t all we were working on that quarter: we also shipped several free updates to our Mac apps, including the OS X Yosemite refresh of OmniFocus with support for new Today & Sharing extensions and a tear-off View Options popover, and a fully localized update to OmniGraffle 6—adding Dutch, French, German, Italian, Japanese, Simplified Chinese, and Spanish.

With those huge accomplishments completed, you might think things at Omni would have started to slow down a little when we entered the second quarter in April. But our release schedule was just starting to heat up: we shipped 10 more updates in April, including the OS X Yosemite refresh of OmniOutliner, a major update to OmniPlan for Mac adding support for Microsoft Project 2013, and an app for an entirely new platform: OmniFocus for Apple Watch. And then followed that up with another 10 updates in May, including a free major update to OmniFocus for Mac which made the Today extension customizable.

Our public release schedule did slow down in June, as Apple’s annual developer conference shifted our attention towards getting our apps ready for the upcoming round of operating system updates: iOS 9, watchOS 2, and OS X El Capitan. iOS 9 was preparing to introduce a huge platform shift, with apps on iOS being able to share their screen with other apps for the first time ever and with long-awaited support for global “Spotlight” searches of app content. And watchOS 2 was slated to bring even bigger changes to Apple Watch, with Watch apps being redesigned to run as native apps on the watch and with support for apps to add “complications” to the watch face. All this was expected to ship in early September, so we only had a few months to get our apps ready if we wanted to support all those features at launch. (Which we certainly did!)

But even with all that work going on behind the scenes, we continued to ship some big releases in the summer. In July, we shipped an OmniFocus for iOS update which added a “Dark” mode, swipe-to-flag, and push-triggered responsive syncing; as well as an OmniOutliner for Mac update with new PowerPoint and comma-separated values (CSV) export formats, plus support for Dutch, French, German, Italian, Japanese, Simplified Chinese, and Spanish. In August, we updated OmniGraffle and OmniOutliner for iOS to add support for iCloud Drive and other external document storage providers, and we updated OmniGraffle for Mac to add support for syncing stencils and templates.

Which brings us to September, the month that Apple shipped iOS 9 and watchOS 2. I’m pleased to be able to say that every one of our apps were ready with support for side-by-side multitasking and global searching on the day iOS 9 shipped, and that our new, native Apple Watch app was also ready on the day watchOS 2 shipped—with full support for a customizable watch face complication.

Of course, Apple always likes to spring a few surprises when they announce new hardware; this year was no exception. Apple announced 3D Touch for the iPhone 6s series and the coming iPad Pro, with its hardware keyboard and Apple Pencil. We had just one week after shipping our iOS 9 updates to deliver another round of updates adding 3D Touch support to all our iOS apps. Happily, we made that target as well! With those updates shipped and some of our team preparing for the iPad Pro, we turned the bulk of our attention back to our Mac apps.

Kicking off our Mac updates in late September, we added haptic feedback to OmniGraffle for Mac, so that when a shape snaps into alignment you can physically feel the snap with your fingers on the trackpad.

Shipping on October 7, our biggest release of the year was OmniPlan 3 for Mac, with its new network diagram view, its multi-project dashboards, its easy-to-read and easy-to-customize project reports, and its advanced tools for earned value analysis and Monte Carlo simulations. It was a huge release, and ended up being featured by Apple on the Mac App Store both at its launch and again at the year’s end, as one of the apps considered the Best of 2015.

But don’t tell that to our OmniFocus customers! They were enjoying the biggest update to OmniFocus 2 for Mac since it shipped, with custom columns and compact title folding making the app much easier to scan visually. And OmniOutliner customers were getting a big Mac update of their own, adding support for syncing templates between Mac and iOS.

Meanwhile, winter was coming—well, November—and it was time to get those iPad Pro updates ready if we wanted to have them shipping on launch day. (Especially since it wasn’t quite clear exactly which day in November that launch day would be!) So in early November, we found ourselves once again shipping major updates to each of our iOS apps, this time adding support for the new large iPad Pro display and for full hardware keyboard support (with shortcuts appearing when the Command key is held so you can discover what those shortcuts are). With Apple Pencil in mind, we also updated OmniGraffle to recognize shapes, making it even easier to create great-looking prototypes.

Turning our attention back to the Mac, we listened to what customers were asking for in the new OmniPlan 3 release for Mac and quickly added a full complement of localizations as well as support for printing dashboards. We also updated OmniPlan for iOS to support OmniPresence syncing, making it easier than ever to keep your OmniPlan documents up-to-date across all your devices.

And closing out the year in December, we had one last big set of updates for OmniFocus, this time shipping simultaneously on both Mac and iOS. On Mac, we added support for push-triggered syncing, so that edits on any device would now appear within moments on all your other devices. (As of this writing, we’ve now sent over 190 million pushes to Mac and iOS devices!) On iOS, we also added note and attachment indicators on editor tabs, making it easier to see where your notes are so that you don’t have to play hide and seek. And on both platforms, we implemented one of our most-request features: updating Due Soon to include a “Today” option, which only included items that were due before midnight on that day (rather than showing any items due within the next 24 hours).

So, we had quite a productive year! And I only briefly highlighted the releases that introduced new features; if you count all of our releases, including bug fixes and other updates, we shipped 85 updates (averaging well over one per week).

How did last year’s plans match up with reality?

Looking back at what I said we were planning to do at the start of last year:

All of which might explain how we managed to finish the year receiving two more of the App Store’s “Best of 2015” awards.

2016 has barely begun, but we’ve already kicked off the year with yet more updates! In the first week of the year, we shipped an OmniFocus update on iOS adding note and attachment indicators to list rows, and an OmniOutliner update on iOS adding PowerPoint export and supporting taller popovers on iPad Pro.

On Mac, OmniFocus will also be getting more control over style settings, allowing more font and color choices such as switching to dark mode. We’ll continue to improve syncing, turning our attention to changing the file format to improve conflict resolution for synced edits and to allow backward- and forward-compatible syncing as we introduce new features to OmniFocus.

OmniFocus for iOS will share those syncing improvements, of course. We’ll also be adding support for more 3D Touch “peek” and “pop” gestures on iPhone 6S, making it more efficient to access item details while browsing a list.

We want to make it easier than ever for the OmniGraffle community to share their work, so we have OmniGraffle updates coming for both Mac and iOS which let you share stencils to Stenciltown right from within the app. And even if you’re not using Stenciltown, you’ll be able to share or print the document you’re currently editing by tapping an always-available Share button on the top toolbar, rather than having to exit to the document browser first.

That new Share button in the iOS document toolbar isn’t just for our OmniGraffle customers, of course; it will also be coming to OmniOutliner and OmniPlan very soon!

Speaking of OmniPlan: we will, of course, be bringing OmniPlan 3 to iOS as well—in fact, we expect it to ship in just a few weeks! We’ll go into more detail as that date approaches, but I’ll just quickly say that we’re bringing over OmniPlan 3’s network diagram view from the Mac, along with Monte Carlo simulation, Microsoft Project 2016 support, and many other new features.

For OmniOutliner, I’m very pleased to share that we have some major writing improvements on the way! On both Mac and iOS, we plan to support distraction-free full-screen editing, the ability to see your current word count, and support for directly editing Markdown documents. (And on iPad, we hope to let you directly print your outline without first having to export to HTML.)

Across the board, in all our apps, we’ll be continuing to improve the overall user experience, finding out where the little points of friction are that get in the way and make the apps more difficult than they could be.

We’ll be working to make your documents and data more secure by adding support for encrypting your Omni documents, so even if someone else gets their hands on a sensitive document they won’t be able to read it unless they also have its password. And we’d like for you to be able to encrypt all the documents and data you’re storing on our Omni Sync Server so that any access to that data requires your authorization—as a technical limitation, not just a matter of policy and trust.

Finally, we’re working hard on making iPad Pro the best platform it can be. When Tim Cook introduced iPad Pro in September, he said: “iPad is the clearest expression of our vision of the future of personal computing: a simple, multi-touch piece of glass that instantly transforms into virtually anything that you want it to be.” I still find that vision as compelling as when we decided to go “iPad or Bust!” when iPad was introduced in 2010, and if we truly want to achieve that vision we still have a lot of work to do to bring more of the power of the desktop to that transforming piece of glass. I can’t wait to share the fruits of that labor with you once it’s ready!