Welcome to the 2020s! Ten years ago (on January 27, 2010), Apple introduced iPad—a new device category that would, as Steve Jobs put it, “connect users with their apps and content in a much more intimate, intuitive and fun way than ever before.” Inspired by the announcement, we put many of our plans for the next few years on hold—and just two days later I shared our first public company-wide roadmap, “iPad or Bust!”

Our roadmaps have never been perfect predictions of the future. Our world is constantly changing, and each year we have to be prepared to adjust those plans based on what we’ve encountered along the way:

But while our roadmaps don’t predict the future, they do state the direction in which we’re headed—and I hope you find them useful!

Before we talk about future roadmap, let me quickly summarize the major updates from last year:

(For more detailed notes on what we did last year, I recommend reading last year’s September roadmap update.)

In last year’s roadmap, I said that beyond shipping OmniFocus for the Web, we would continue to work on site licensing, JavaScript-based automation, sharing linked tasks, and improving the flow of using our apps:

“We’ll be reviewing the ways customers navigate our apps—making them easier to navigate on small touch devices, more efficient to use from a keyboard, and more accessible to the sight-impaired. We’ll be improving integration between our own apps (such as linking tasks between OmniFocus and OmniPlan), between our apps and others (such as OmniGraffle’s import and export of Visio and SVG files), and with the rest of the system. We’ll be tracking down and fixing rare crashes and other bugs. And we’ll be taking a hard look at performance issues, so our apps respond to your input faster.”

We did ship OmniFocus for the Web as planned—but when iPadOS was announced in June we took a pretty big detour from the rest of our planned roadmap. There was a lot of benefit in that detour: it’s great to have multiple windows on iPad, support for iCloud Drive and other document providers, and Dark Mode! But it did leave a fair amount of unfinished business from last year’s roadmap, and we’re continuing with that work this year.

Specifically, we will continue our work on sharing linked tasks in OmniFocus, and on improving integration both between our own apps (such as linking tasks between OmniFocus and OmniPlan) and between our apps and others (such as OmniGraffle’s import and export of Visio and SVG files).

We’re also continuing to improve the flow of using our apps—particularly on iPad and iPhone. We want easy navigation, so everything in the app feels like it’s right at your fingertips—whether your fingertips are using the mouse, touch screen, or a hardware keyboard.

As we do this work, we’re also actively listening to your feedback. When we hear that you’re repeatedly encountering pain points in our apps (whether you’re encountering performance or stability issues, or dealing with common workflow issues such as time zone changes in OmniFocus), we will be setting aside time for addressing those issues.

But AppleScript had some big caveats: it was generally easy to read, but it was a fairly esoteric language that many developers found less easy to write. It was able to accomplish some amazing things, much faster and more accurately than working by hand—but it was generally slow enough that you could watch it work, and if it had a lot of work to do you could be watching and waiting for a while. And it was only available for the Mac platform—which was totally fine in the ’00s when that was the only place our apps ran, but was a lot less useful in the ’10s when our customers were increasingly spending their time on mobile devices.

Why does this matter? If you don’t know how to program JavaScript, how does Omni Automation benefit you?

By providing automation technology in our apps, we make it possible for customers to extend our apps’ capabilities. People can build customized solutions to meet their own needs—and then share those solutions with others. We had thousands of customers using Kinkless GTD in OmniOutliner, even though most of those customers didn’t know AppleScript. I’ve been told that one of JTech Communications’ most popular blog posts was for a script for OmniGraffle which counts items on a canvas. With automation, people are able to create their own keyboard shortcuts to quickly perform actions like creating a task calendar from OmniFocus, or exporting Markdown from OmniOutliner—and those solutions can often be shared with others, making everyone’s lives easier.

Automation is also a building block that can be used to integrate our apps with other applications and systems. We’ve had customers use AppleScript automation to sync OmniPlan with their internal bug tracking systems, so they can easily keep their project plans up-to-date as work gets completed and their tracking system up-to-date as their plans change.

It’s definitely true that writing JavaScript code isn’t for everyone! But automation solutions powered by JavaScript have the potential to benefit everyone—and we’ll be working to make it easier for all of you to share your solutions with each other.

In our ideal world, nobody would have to think about how our apps are distributed and licensed. You would simply install the app from whatever source is most convenient for you, and pick whatever licensing option works the best for you. This was how our software worked in the ’90s and ’00s: you could install our apps from CDs or our website, and you could purchase licenses for those apps from retail stores or our website—whichever was most convenient for you.

That picture has changed with the App Store. We can still offer app downloads and licenses on our website, but only for the Mac platform—to install on an iPad or iPhone, you must install from the App Store. We can offer trials and upgrade discounts and price protections in the App Store, but only when we use free downloads with in-app purchases. But in-app purchases can’t be made directly by businesses and schools—so those customers really need the option to pay in advance as well.

Those who follow closely may have noticed that we introduced another approach to this problem last year: sign-in licensing, which is used for our cross-platform OmniFocus subscriptions. While the App Store doesn’t allow apps to be unlocked using license codes, it does allow apps to be unlocked based on signing into the app (as seen with Microsoft Office, Netflix, and many other apps). With the sign-in licensing model, you no longer have to worry about how the app was installed, or whether their subscription was purchased from within the app or directly from our website. You don’t even have to worry about which platform you’re using: the same sign-in unlocks OmniFocus on Mac, iOS, and web.

We think this provides a much better experience overall. But right now this experience is limited to individual OmniFocus subscribers—which means most of our customers still have to think about how they’re licensing our apps, because it doesn’t apply to any of the other licensing methods. To make this benefit universal, we’re working on supporting sign-in licensing in all our apps. We’re extending it to support teams, so organizations can purchase subscriptions for people on their teams. (This includes single sign-on support for our larger customers—many of whom have tired of managing spreadsheets with hundreds of license codes.) And we’ll also be updating our store to support sign-in licensing for one-time “à la carte” purchases of our apps, so customers who prefer that model can benefit from it as well.

OmniFocus for the Web

OmniFocus for the Web is still relatively new, having shipped less than a year ago. It’s been very useful and popular—but in terms of functionality, it still has a lot to do to catch up with its older siblings on other platforms! Aside from keeping pace with new features (like floating time zones), our top priorities are to add support for custom perspectives and for the Mac app’s Focus feature (so you can focus on your work projects when you’re on your Windows box at the office).

We’ve been listening carefully to your feedback on OmniPlan, and I’m very pleased to share that we’ll be shipping OmniPlan 4 for Mac in the first half of this year! We’ve improved the discoverability and ease-of-use of OmniPlan’s existing feature set, and introduced a number of new features like Recurring Tasks and Task Roll-Up. We’ll be introducing OmniPlan 4 more fully as we start its public test period (soon!), but for now I’ll focus on just one of those features, Interval Tracking:

Many of our OmniPlan customers have asked for a way to report on the costs of a project over time, not just broken down by task or resource groupings. OmniPlan 4 solves this problem by adding Interval Tracking, which breaks down the cost over time of each item on the Gantt chart, based on your current Gantt scale: 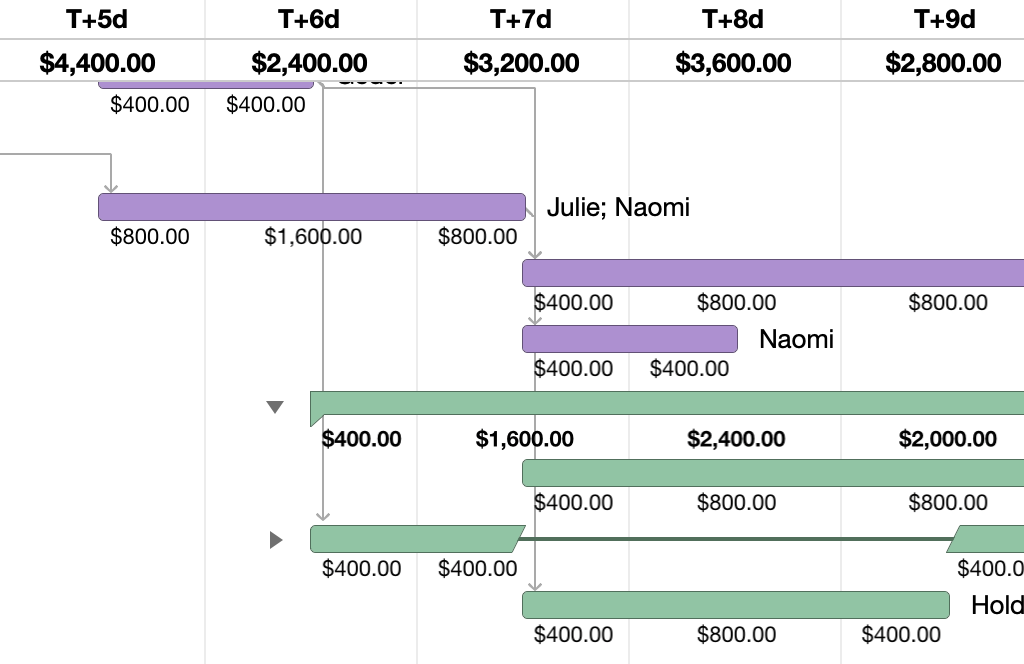 For those of you doing cost planning (or reporting), Interval Tracking makes it much, much easier to see exactly how much time or money you’re going to need to spend (or have already spent) on each item or group. (And if you just need to see the totals, we’ve got you covered! You can enable Interval Tracking for just the headers.)

I hope this year’s roadmap gives you a sense of where we’re headed next! When we think about what to focus on next, we think about how to build products that help you, our customers, be your most productive selves. You’re working on big projects, and you’re looking to us for powerful tools to help you with those projects. It’s our job to help you accomplish those projects efficiently and effectively, without wasted effort. As we work to improve our products, we hope that the improvements we’re making will help you do just that.