Earlier this morning we submitted OmniGraffle 3 for iOS to Apple for TestFlight approval. In it, of course, is a whole lot of work: we’ve made several big decisions that we think make OmniGraffle even easier, faster, and more powerful to use on iPad and iPhone. 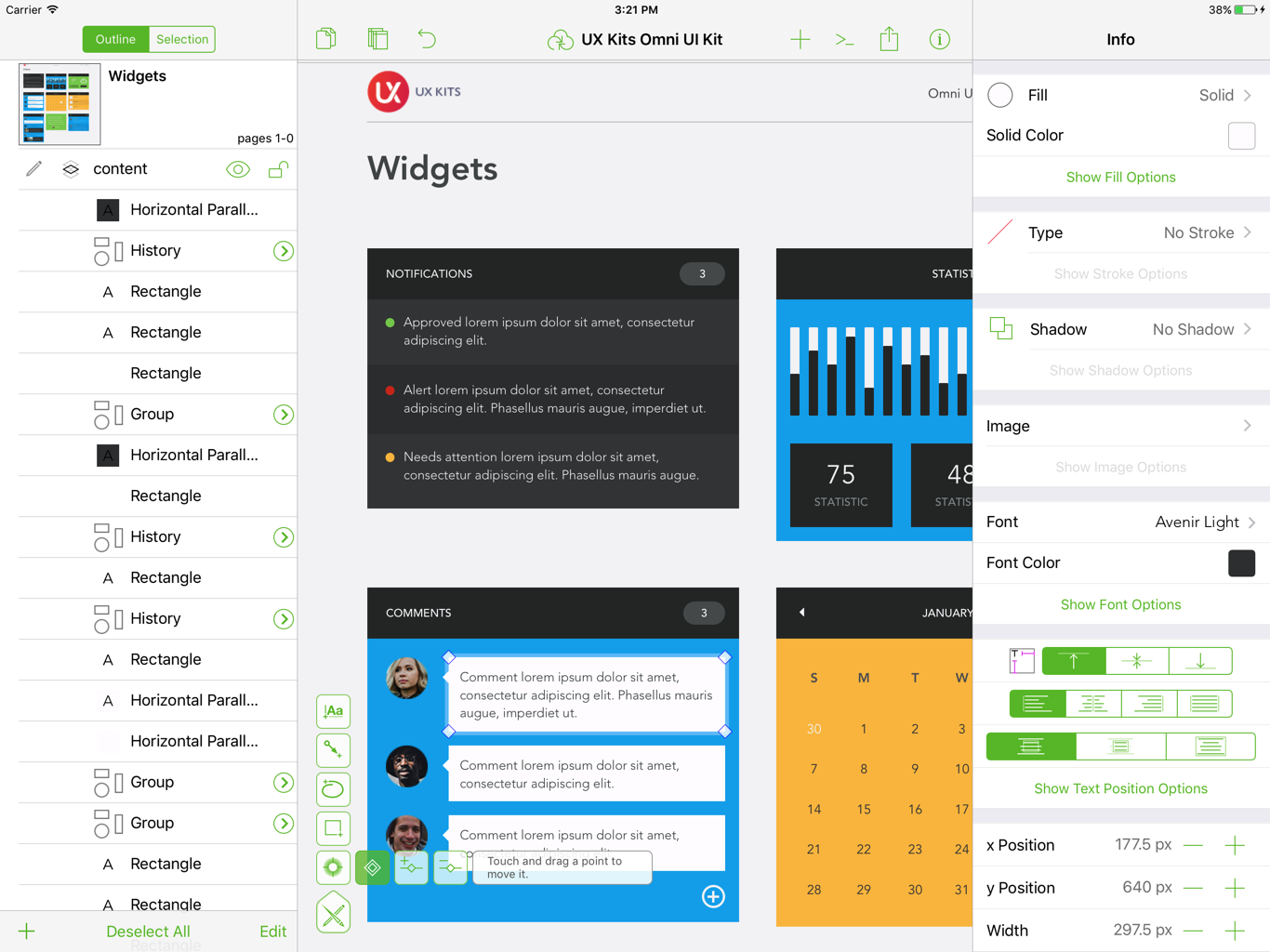 At the core of OmniGraffle are several major concepts users need quick access to: objects, groups, layers, artboards, and canvases. We’ve switched away from popovers and over to flexible sidebars in OmniGraffle 3. You can toggle the sidebar off or on depending on how you’re working, and what you’re working with, so that moving from object to object to make minor changes is much faster than before—less taps to get to the popover, to close it, etc. (And you can select multiple objects, too!)

That’s on the left. The sidebar on the right contains your usual Inspector gadgets. And, again, we’ve made some decisions to give you the most common settings at the top…with the ability to get into the nitty gritty just below it. On devices where sticking sidebars to either edge will completely hide your canvas, they’ll switch back to a popover.

We’ve gotten even closer to parity with OmniGraffle for Mac, too: Artboards, converting text to shapes, the Infinite Canvas, and more, are all set for testing.

The Infinite Canvas is also a part of what we’re calling Canvas Modes. Something we’re trying—and we hope it works!—is making the distinction between fixed-size canvases, auto-expanding (when needed) canvases, and infinite canvases. We’re hoping to bring the same concept to the Mac, too.

The Tool Palette moves freely, too—mostly. It can be oriented either vertically or horizontally in each of the workspace’s four corners.

And there’s more! This is the first release that includes the groundwork for automation. It’s exactly like writing JavaScript—we’re using Apple’s JavaScriptCore framework on both Mac and iOS. As we wrote about earlier, we’ve enlisted Sal Saghoian to put it through its paces. You can learn more about Automation in OmniGraffle over at the website he’s been working on.

So, you can help if you’d like! If you use OmniGraffle 2 already, think you could make use of OmniGraffle 3, or just really like testing software, we’d love it if you could help. You can check out the preview page to learn more about the new features, and sign up for our TestFlight.

Over the course of this public test, we’re looking for much of the same feedback we did during the OmniGraffle 7 for Mac test period: How does OmniGraffle accelerate or decelerate your workflows? What could be better? What do you like, but think we should come at from a different angle?

In Ken’s Looking Ahead post, we shared that from January 24th on, all users purchasing OmniGraffle 2 will get a free upgrade to OmniGraffle 3. For customers that have purchased any version of OmniGraffle 2 before that, appropriate discounts will show up when look—just make sure OmniGraffle 2 for iOS is still installed on that device. Coming soon!

Have a great Thursday!