At the Omni Group, one of our inspirational touchpoints is a quote from a 1990 interview with Steve Jobs, filmed shortly after he launched NeXT:

I think one of the things that really separates us from the high primates is that we’re tool builders. I read a study that measured the efficiency of locomotion for various species on the planet. The condor used the least energy to move a kilometer. And, humans came in with a rather unimpressive showing, about a third of the way down the list. It was not too proud a showing for the crown of creation. So, that didn’t look so good. But, then somebody at Scientific American had the insight to test the efficiency of locomotion for a man on a bicycle. And, a man on a bicycle, a human on a bicycle, blew the condor away, completely off the top of the charts.

Steve’s notion of a bicycle for our minds—a tool which we can leverage to dramatically increase our mental effectiveness—inspires us to build the apps we build here at Omni. Computers can only empower us to do whatever they’ve been programmed to do, so as developers of productivity apps it’s our role to design and build apps that empower our customers.

While all of our apps share this common goal, the way in which our apps empower customers are easier to explain for some apps than others. OmniGraffle helps communicate ideas visually. OmniPlan helps schedule complex projects. OmniFocus helps manage your personal tasks. And OmniOutliner helps you… well… outline things.

In many ways, OmniOutliner is the single app of ours that comes the closest to Steve’s vision of a “bicycle of the mind.” But in much the same way that it wasn’t always easy to explain the value of computers to people in the late ’80s, it can be difficult to explain the value of OmniOutliner to people who have never had the experience of working with a really great outlining app. We can talk about specific ways customers have used OmniOutliner, of course: to organize their class notes, write technical books, track characters in works of fiction, write screenplays for movies, track budgets and expenses, and organize doctoral theses. But a list of examples misses the point: OmniOutliner is a general-purpose tool which helps you think. It’s the app I turn to whenever I need to capture a bunch of chaotic, abstract thoughts and put them together in an organized, coherent whole.

So when we started thinking about the direction of OmniOutliner 5 for Mac, the problem of helping people discover and understand the benefits of an outlining tool was very much on our minds. And, naturally, we started thinking back over OmniOutliner’s long history. We shipped the first beta of OmniOutliner while Mac OS X was still in beta, and doing so introduced us to a passionate community of outliners who had been using great outlining tools like MORE for over a decade. In response to all their feedback and requests, we quickly iterated with version 2—and it was around this time that Phil Schiller discovered OmniOutliner, leading to Apple paying us to bundle OmniOutliner 3 with every Mac as Apple made the transition from PowerPC to Intel. With Apple shipping millions of Macs a year, this introduced OmniOutliner to a much broader audience—large enough that for many years after Apple launched iWork and stopped bundling third-party apps, we still had more people actively using the bundled copy of OmniOutliner than any of our other apps.

But it’s been another decade, and over time that huge audience of Apple customers using the bundled OmniOutliner has waned, even as the size of the entire Apple market has grown dramatically. I find more and more that our potential customers on Mac and iOS don’t really know what an outlining app is or why they might want to buy one.

Which brings me back to planning the direction of OmniOutliner 5. The direction of the Pro edition (currently in public test) was the easy part of this—for that, we simply needed to look at what our core Pro audience was telling us they needed: advanced filtering, word count, typewriter mode, and so on.

But our goals for OmniOutliner 5 were much more ambitious than that. We didn’t want to just reach out to our existing audience; we wanted to introduce the joys and benefits of outlining to a much larger audience. We decided that meant two things: we needed to make the app much simpler, and we needed to make it much more affordable.

So! With that background, I’d like to introduce you to OmniOutliner Essentials: a svelte, focused, and extremely affordable outlining app. In OmniOutliner’s new Essentials edition, your entire focus is on your own content: there are no distracting sidebars or panels. You can choose to work in a window or in a distraction-free full-screen mode, selecting from a set of beautiful built-in themes. As you write, you’ll be able to see some key statistics about your content so you can track progress towards your goals. But our goal is to help you focus on your content and whatever task you’re working on—not on the tool you’re using.

With the Essentials edition, we’ve lowered OmniOutliner’s entry price from $49.99 to an extremely affordable $9.99. And since we want our upgrade price from Essentials to Pro to be $49.99, the new list price for Pro has been lowered to $59.99: 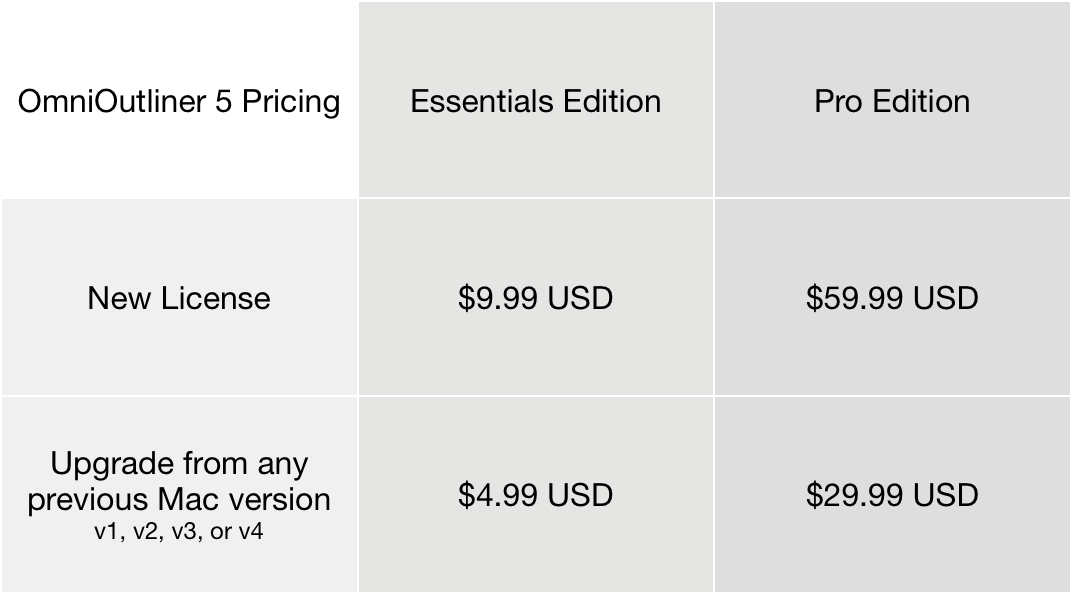 Since OmniOutliner Essentials replaces the old Standard edition, we’ll be giving anyone who purchased Standard within the past few months a free automatic upgrade to OmniOutliner 5 Pro. And anyone who upgrades from any previous version of OmniOutliner (even those free copies Apple bundled with all those Macs a decade ago) will be eligible for a 50% discount—so you’ll be able to upgrade to the new Essentials edition for $4.99, or to the new Pro edition for just $29.99.

OmniOutliner Essentials will be available in Public Test starting today, and we’re very interested in any feedback you might have—especially from those of you who may be trying an outlining app for the first time. You can learn more and download the app here, and when you’re running the app you can choose Contact Omni from the Help menu to send email to our support humans.

I’m incredibly proud of all the work our team has done on both the Pro and Essentials editions of OmniOutliner 5, and I look forward to introducing a whole new generation to outlining!

(Feedback on this post? I’d love to hear from you! You can find me on twitter at @kcase, or send me email at kc@omnigroup.com.)

P.S. — Yes, OmniOutliner Essentials will be coming to iOS (when we ship version 3 later this year). And yes, it supports document syncing.