All three updates include the extremely useful and oft-requested feature of flexible weekly repeats. Set up an action to repeat every week on certain days: every weekday, every weekend, just Mondays, etc.

Previously, the best way to create a weekday-only or weekend-only repeating action was to create one action for each day, and set to repeat every 1 week. That method worked, but admittedly required a bit too much initial effort.

Set up a configuration with a few clicks or taps: on the Mac, open up the Inspector; on the iPhone and iPad, bring up the Action Details editor and tap the Dates column like usual. Choose the “every” repeat type, pick a few days, and done. 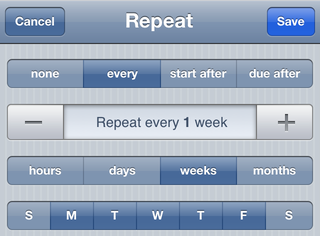 This makes things easier for many customers, and we’re very happy to have it available. We’d like to add more functionality for repeating actions in the future, too.

Finally, OmniFocus for Mac has a new icon, OmniFocus for iPad has been retina-ized, and we’ve fixed a few more bugs! For full release notes: Mac, iPad, and iPhone.

Now we can schedule around them.

Update: OmniFocus for iPhone 1.14 was just released! Update when you see it and don’t forget to turn iCloud Reminders back on.