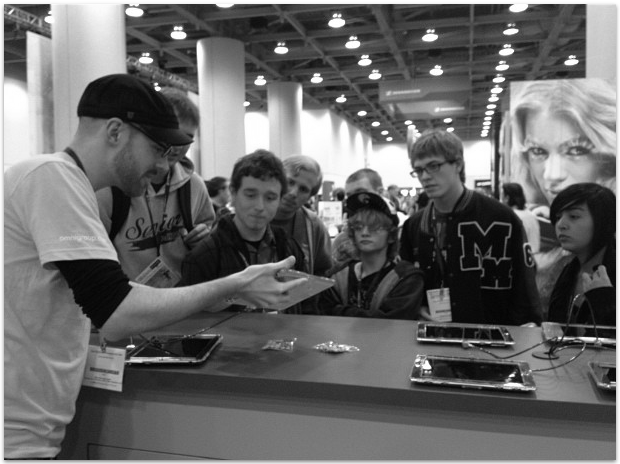 Not on the show floor

This is usually when we start making announcements about Macworld for next year. We have some different news this time, though: we’ve decided not to have a booth presence on the show floor in 2013.

This was a tough decision to make, as Macworld gave us our first real “meet and greet” with our customers. One of our first shows was back in 1998 when we shared OmniWeb for Rhapsody, alongside Bare Bones Software (they were showing off a pre-release of Mailsmith), to a new set of OS X-ready users. Our presence included a good chunk of the company, a few computers, and a shared booth.

We do software, and increasingly the Expo Hall at Macworld has been shifting toward hardware. To better serve our customers, we decided to pursue a more personal way to interact and talk software during the show.

(By the way, Macworld still has a full lineup of great talks, workshops, and special events.)

So it’s very important that we continue to make that happen. We’re stepping out and trying something different.

But we’ll still be around

This year we went to a new thing called Userconf. When we heard Chase from 37signals talk about their experimentation with showing off Basecamp, live and in-person to customers, we were intrigued. With OmniFocus (and all of our apps), introducing the app in a minute is difficult (You put things in completable projects after you do a brain dump and use contexts as places or things to do them!), so having 30 minutes to talk about specific features or concepts would be pretty cool.

So, we’re going to try it with The OmniFocus Setup! You can put your name and a question in for a session, and we’ll do the best that we can to see everyone. (With the caveat that, depending on interest, we might have to filter them a bit.)

What The OmniFocus Setup is

So, on January 31st, we’re going to schedule a full day’s worth of OmniFocus “learning sessions” — usually 1-on-1s, but we’re going to turn popular topics into group sessions, too. Someone that really knows how to use OmniFocus (an Omni person) will be there to talk through workflows, features, or whatever, on iPhone, iPad, or Mac.

We’re also going to be doing another thing that we’re waiting to announce until early January, so follow us on twitter if you’ll be around during Macworld. (Remember the get-together during Macworld 2007?)

And a Little Bit More (Update!)

We’ve had a pretty great response to our plan for 1-on-1 learning sessions. A few other people (you’ve probably heard of ‘em) were excited enough to volunteer their brains and know-how, so we’ve added a bit more to our day.

If you’ll be in the area this year, please join us for a set of talks on OmniFocus with Kourosh Dini, Sven Fechner, Dina Sanders, Tim Stringer, and Mike Vardy. Afterwards, we’ll have a panel discussion. All the details here, and check back later for even more!