Update: I've added some comments about the -[CALayer shadowPath] approach that I missed before.

I've just pushed a new sample to the OmniGroup? source on github which shows several drop shadow approaches, with an eye towards performance, particularly while the shadow casting object's frame is being animated. One of these is a pair of functions vended by OmniUI, OUIViewAddShadowEdges?() and OUIViewLayoutShadowEdges?(), which originate from writing our document picker. In this case we want to be able to smoothly animate between two apparent view sizes as you open and close documents.

Opening up OmniGroup/Frameworks/OmniUI/iPad/Examples/DropShadowOptions? and building, you'll see a set of options that control the testing: 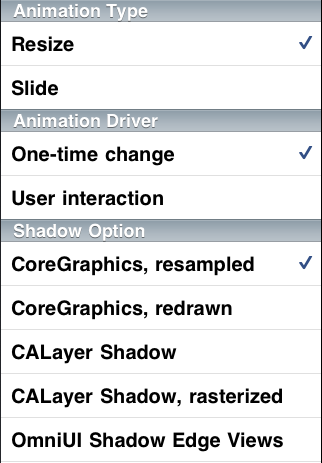 Running this app under Instruments with the Core Animation tool, we can check out the relative advantages of each approach. Instruments doesn't give a precise frame rate over time, but really we don't care. In the real world, you'd have other work to do during a live-resize of an object, so anything here less than 60fps (for just the shadowing) is likely too slow.

I'll call out the one "Slowish" result; this timed at ~45fps on my iPad. CoreGraphics shadowing is amazingly fast — nice work. Still, depending on the rest of your workload during the resize, "pretty fast" may not be good enough.

The default behavior of UIView/CALayer is great for simple situations. If, however, a user is dynamically interacting with an object that casts shadows and you want that object to not get blurry as it resizes, CoreGraphics may not be as fast as you'd like (obviously the rasterization or relayout of the inner content matters too).

Don't turn on CALayer shadows unless either enable rasterization on and aren't going to be changing the view's size, or are willing to do the extra bookkeeping to maintain a shadowPath. Generic CALayer shadows are stunningly slow if all you need is a rectangle, but the shadowPath hint makes them very zippy.

Finally, what does the OmniUI shadow edges approach tell us? This particular hack may not be useful in your app, but the core idea is that you shouldn't do work you don't need to do. When resizing axially aligned, opaque objects, we don't need a fully general shadowing algorithm.

We can deceive the user into thinking a real shadowed object is floating in their view, but we don't have to implement it that way. On a "magical" device like an iPad, you need to act like a magician: as long as it looks like something visually complicated is really happening, then your job as illusionist is complete.