Typically before we ship a new version of OmniGraphSketcher, I like to try using the app to re-create a real economics diagram based on a set of the most interesting graphs in an economics textbook. In other words, I try to simulate the experience of being an actual OmniGraphSketcher user.

The last time I did this, I was blown away by how easy it was to draw this professional-quality graph, right there on my iPad — just by tapping and dragging my fingers. 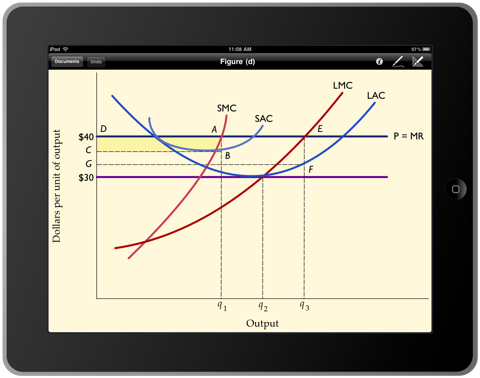 I mean, look at that! I could easily email it in PDF format directly to a textbook publisher.

There was one frustration, though. It was difficult and somewhat error-prone to precisely position text labels, especially when they were short, abbreviated variable names. The labels were mostly hidden under my finger, so adjusting them just right required zooming in as far as I could and even then having to guess if I was in exactly the right spot.

I knew that Apple's iWork applications had solved this problem with a “nudge” gesture, which you perform by holding one finger on the object to be adjusted and then swiping a second finger in the direction you want to nudge. The object being held shifts by one pixel per swipe. That feature was already on our very long to-do list, but no customers had ever requested it, so it was not in any immediate plans. Yet assembling this example graph made it clear that finely adjusting objects was the weakest link in our quest to make graph creation as quick and easy as possible.

I set about implementing the nudge gesture, which quickly turned into a major overhaul of our whole gesture recognition system. That overhaul made the other gestures more reliable, and it paved the way for new and interesting gesture shortcuts. For example, OmniGraffle for iPad now includes the ability to quickly send objects forward and backwards by pressing one finger on the selection while swiping two more fingers up (to send forward) or down (to send backward).

Now that OmniGraphSketcher for iPad includes the nudge gesture, creating that complex economics graph is really a breeze. You'd think I'd have gotten used to it by now, given that I've been developing the app ever since the iPad was announced and I know in detail how it all works. Yet Apple's term “magical” is still the best way I know of to describe what it feels like to use the app to make beautiful, accurate graphs.