Recently I was reading about the ad agency that came up with the original AFLAC duck campaign. It's one of those amazing marketing success stories: AFLAC went ten years struggling to figure out a way for people to remember their name, and with Kaplan Thaler's commercials their brand awareness went from 12% to 90%.

The duck was the perfect solution to their problem – who doesn't know the word AFLAC now? – and since the commercials were so memorable and entertaining, they also did a great job of drilling home the secondary message (Hey, we sell health insurance! Ask for it at work!).

Companies usually put so much effort into having their branding campaign tell a story, sometimes with huge budgets and fantastic success (Target's commercials, for example: We sell all kinds of crap! It's sparkly! We're fresh and hip and appealing to a young affluent demographic, unlike that grody old Wal-Mart!), sometimes by creating a revolting animated hunk of snot to act as company mascot (I'm looking at you, Mucinex) – it's kind of refreshing to see an ad whose main goal is simply to sear the company's name into your head. AFLAC!

Of course, that concept can be taken too far. You know, that certain product…the one that you apply…directly to your forehead?

Anyway, I was thinking about Omni's overall brand and what we're known for. We do try and create continuity in our marketing communications, but I wouldn't say we adhere to a particularly rigid brand strategy. Which is nice, in a way, because you never hear anyone in Omni's building utter the words, “Well, I don't know, that's not really on message.”

But I do think we could use a lovable, curmudgeonly talking animal of some kind. Perhaps a star-nosed mole! 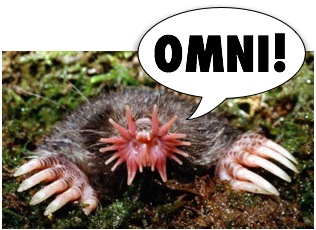 So what do you think of, when you think of Omni? Do you think of one particular application? A style of interface design, maybe? A group of old-school Mac nerds who still have a pile of NeXT machines in the basement? Why do you like (or dislike) Omni?