One of the best aspects of doing the work that we do is getting to see the really cool stuff that customers do with the tools we make. One such nugget of awesome came to us last Friday, when we got an email with this AppleScript as an attachment:

[Update: If you downloaded an earlier version of the script and it didn't work, try the updated one above. It handles the '~' in the iPhoto library preference now, and it avoids a problem that folks using a document style with no line head specified would encounter.]

The script makes use of the new Faces feature of iPhoto '09. It looks for named faces in your library, then creates an OmniGraffle document showing which ones appear in photos together. At that point, it fires off OmniGraffle's automatic layout feature. I'll let the script's author, Armin Briegel, describe the results:

“It probably depends on your picture taking habits, but in my graph you can pick out families and groups of people, such as my son's classmates. The big mess in the middle is obviously our closest friends and families. But even there the families are in close proximity to each other.” 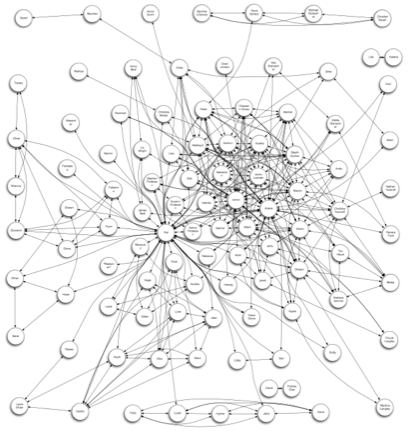 In any case, this gets our robot-stamp of approval, so we thought other folks might want to check it out, as well. Enjoy!